We all celebrate Christmas with a bang every year, dressed in red, decorate Christmas tree, exchange gifts, sing carols, fool our kids in the name of Santa and much more…

But, there was a time when it was illegal to celebrate Christmas. Yes, you read it right… Long time ago, from 1659 to 1681, in Boston you were fined if you were caught celebrating Christmas. Just imagine…!!!

What, How, Why… It’s a long story. Forget all this as now we can celebrate and enjoy it thoroughly.

Santa Claus used to wear blue, white and green coloured clothes in the past. Yes, the dress that we see Santa wearing today is not actually the traditional dress. In 1868, Santa could be seen in a red jacket, but the hat was green and he appeared to have no trousers on at all (Pic below).

Sometime later, very physiologically human and naturalistic aspect to the character of Santa was presented, as opposed to the more cartoonish features which had gone before.

His traditional red suit came from a 1930s ad by Coca Cola. 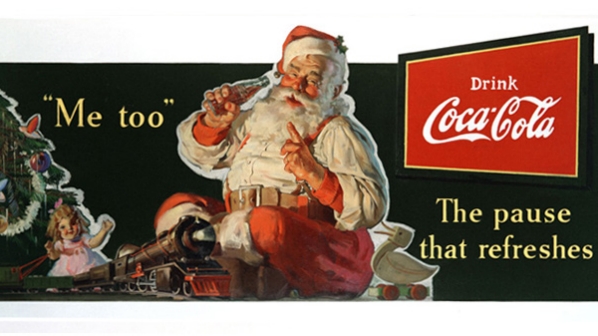 Watch the link below :

Santa got married in 1849. Actually the first mention of Santa with his spouse was made in the 1849 short story A Christmas Legend by James Rees.

“Then there is a knock at the door.

Two strangers appear out of the night, an elderly couple carrying a bundle with “all their worldly wealth,” Rees writes. They ask how far away they are from the city and the father tells them it is “two miles.”

“Two miles?” the stranger says sadly, “we will not be able to reach it tonight. My dear wife is nearly tired out. We have traveled far today.”

The father invites them in and offers his best bed for them to rest. The strangers inquire if this is their whole family. “No. No,” the father says, “we had one other – a daughter.”

“Dead; Alas we all must die,” the old woman responds.

“Dead to us,” the man answers. “But not to the world. But let us speak of her no more. Here is some bread and cheese, it is all poverty has to offer, and to it you are heartily welcome.”

There is a silent pause, then the sound of cheerful merriment, music and laughter, is heard through the open windows and doors. It’s their rich landlord, the father explains, mocking the poor. The old man interjects. “Ah, sir, human nature is a mystery, this is one of the enigmas, and can only be explained when the secrets of the hearts be known.”

The next morning, Christmas Day, the family awakes to find their small room filled with presents: books and games and toys. “O Father, Kris Kringle has been here,” the little girl says excitedly. “I am so happy.”

No one knows the real birthday of Jesus. No date is given in the Bible, so why do we celebrate it on the 25th December ? The first recorded date of Christmas being celebrated on December 25th was in 336, during the time of the first Christian Roman Emperor Constantine.

Last but not the least, Some people don’t think it’s correct to call Christmas ‘Xmas’ as that takes the ‘Christ’ (Jesus) out of Christmas.