These days we are always terrified with the rising temperature, increasing heat and reducing winters. But, today is the day to talk about the lowest temperature recorded on earth.
It has been 36 years now, since the earth experienced its coldest temperature. Although this record was broken in August 2010 when the temperature dropped to -94.7°C.
Still 21 July, 1983 marks an important date in history as the earth recorded a temperature of -89.2°C which was a case study for the scientists for not less than 27 years. It was at the Soviet Vostok Station in Antarctica. 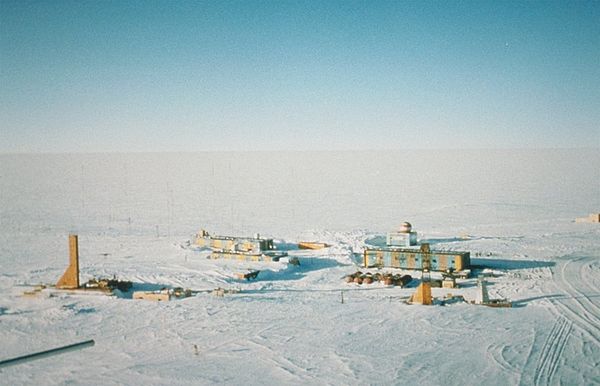 Vostok is a Russian research station located high in the middle of the East Antarctic ice sheet, about 1,300 kilometres from the geographic South Pole. This is a place where the sun doesn't rise during winter. Besides being extremely far south, the station's high elevation, at 3,420 metres (11,220 feet), helps it get really cold. The Vostok temperature is the lowest recorded in the world since official record keeping began in 1912. Temperatures somewhere on earth might have dropped even lower, but there was simply no equipment around at the time to take proper measurements.

Reason for Temperature drop :
This chilly weather is due to the exceptionally high speed of the arctic winds. The downward type winds that bring the brisk temperature, travel with speed up to 200 mph (about 90 m/s) from inland toward the coast of the continent. As one moves toward the higher region inland — that is, toward the true pole — the temperature drops from its normal -40 °C to -80 °C. The coldest temperatures usually occur during the winter months of July and August. That is when Antarctica is in its days of darkness. Warmer temperatures, usually still well below freezing, during the all daylight summer months of December and January.