Remembering Einstein on his death anniversary.

His body was moved from the hospital to the funeral home before being cremated in Trenton. His brain was not cremated with the rest of his body–it went missing for years.
Enstein’s cremation was a private affair and no press or media was allowed to take pictures. Only one photographer managed to capture the events of that extraordinary day : LIFE magazine’s Ralph Morse.

The pictures Morse took that day were never published. At the request of Einstein’s son, who asked that the family’s privacy be respected while they mourned, LIFE’s editors chose not to run the full story, and for more than five decades Morse’s photographs lay in the magazine’s archives, unseen and forgotten.

Einstein’s brain was stolen after his death. Princeton pathologist Thomas Harvey removed his famous brain during his autopsy. Harvey later had the brain cut into pieces and sent to various scientists for research.

This is one of the pictures of Albert Einstein’s office – just as the Nobel Prize-winning physicist left it – taken mere hours after Einstein died. 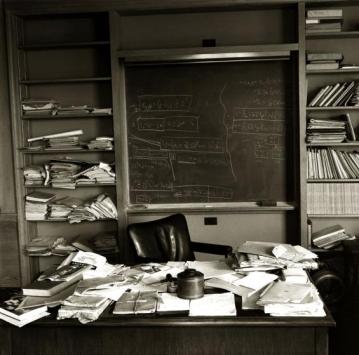